2Lei in Second Life is a collaborative project between some groups in Second Life, which began in 2010 with the aim to raise awareness and disseminate events related to the “International Day for the Elimination of Violence against Women". READ MORE>>>

2Lei: International Day for the Elimination of Violence against Women in SL 2Lei is a collaborative project which involves: 2LifePhotos, Free Art, Arts Merkaba, PAD, SL Art, Tanalois, Salimar, WDT Planet, CSW Island, The Knot and some groups of Second Life.
The aim of the project is to raise awareness and dissemination of events related to “International Day for the Elimination of Violence against Women”

On November 25, 2010 various digital artists, virtual galleries and cultural figures of SL have been called to share in their own lands and groups belonging to, the common message of solidarity to the woman.

2Lei - The Passion of the women
This is our tribute in 360 degrees to the woman and a sign of solidarity with the women raped, abused, denigrated, enslaved, hated, feared, exploited ... This is our way to be close to all the women who cannot be with us, especially on this day. This is our way to voice their hymn to life because their passion has not ended with a resurrection .. but with their death, deprivation ... their annihilation of the being.

Our hug goes to all those women who have walked with us on this world like human beings accused of non-existent difference, of an uncomfortable particularity, of an inappropriate feeling, of a dangerous enthusiasm …accused of being woman .. to be destroyed rather than be loved.
Being a woman today is to be human! With our virtual bodies, our global consciousness and the immortality that distinguishes us in this perfect world, we want to dedicate a day to the human being.

On the day when the real world come together without boundaries in this complaint, we open the doors of the Metaverse to spread our message of solidarity with women.
This message wants to reach the hearts of human beings through the virtual art, the pride of a parallel society in which creative expression deletes the distances and meet together under a single manifest.
2Lei is an Italian project and it is the example of the cooperation of the residents of Second Life. 2Lei project has brought together artists and gallery owners from around the world for the same cause to dedicate one day in the virtual environment to the Passion of women.
On November 25, 2010 in Second Life come with us and embrace all women in the world!

Established by Resolution No. 54/134 by the UN in 1999 in order to sensitize governments, institutions and civil society. The UN has chosen this day to commemorate the tragic story of the three Mirabal sisters raped, stabbed and strangled Nov. 25, 1960, by order of the dictator Trujillo.

Violence against women
- Over the last decade, to fight violence against women has become a priority in many countries. A study by the Secretary General in 2006 on violence against women has found that at least 89 states had some laws on domestic violence and 60 had specific laws against domestic violence. Marital rape was a crime punishable in at least 104 countries. Ninety-three countries had some rules regarding human trafficking. Ninety states had laws against sexual harassment.
- Despite these advances, violence against women and girls is a global pandemic. The problem continues to be universal, with women and girls victims of violence in every region and every country. Women who have been victims suffer from various health problems and reduced their ability to participate in public life.
- According to a study on domestic violence conducted in 10 countries by the World Health Organization (WHO), a percentage between 15 and 71 percent of women reported to have suffered physical or sexual violence from their husbands or partners.
- Among women aged between 15 and 44, the acts of violence are among the leading causes of death and disability more than cancer, malaria, traffic accidents and war.
- In 2006, women and girls accounted for 79 percent of the victims of human trafficking.
- More than 60 million girls worldwide are forced into early marriage, before age 18.
- It's estimated that between 100 and 140 million girls and women in the world currently live with the consequences of female genital mutilation, and about 3 million girls are at risk each year.
- Impunity for the perpetrators, inadequate services for victims / survivors, attitudes and behaviors that perpetuate negative stereotypes and violence against women, and a general lack of resources for the implementation of existing measures remain persistent obstacles to prevention and to 'eradication of violence against women.
Pubblicato da Unknown a 07:09

Partecipa anche tu a 2Lei around all the Worlds https://www.facebook.com/2LeiAroundAllTheWorlds?fref=ts 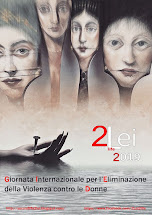 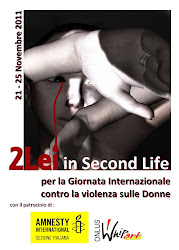 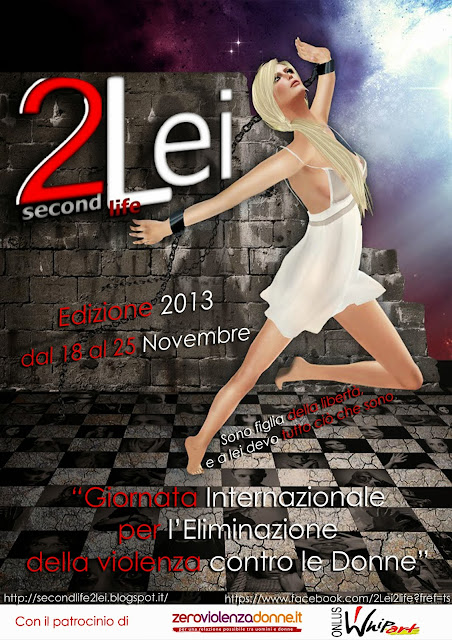 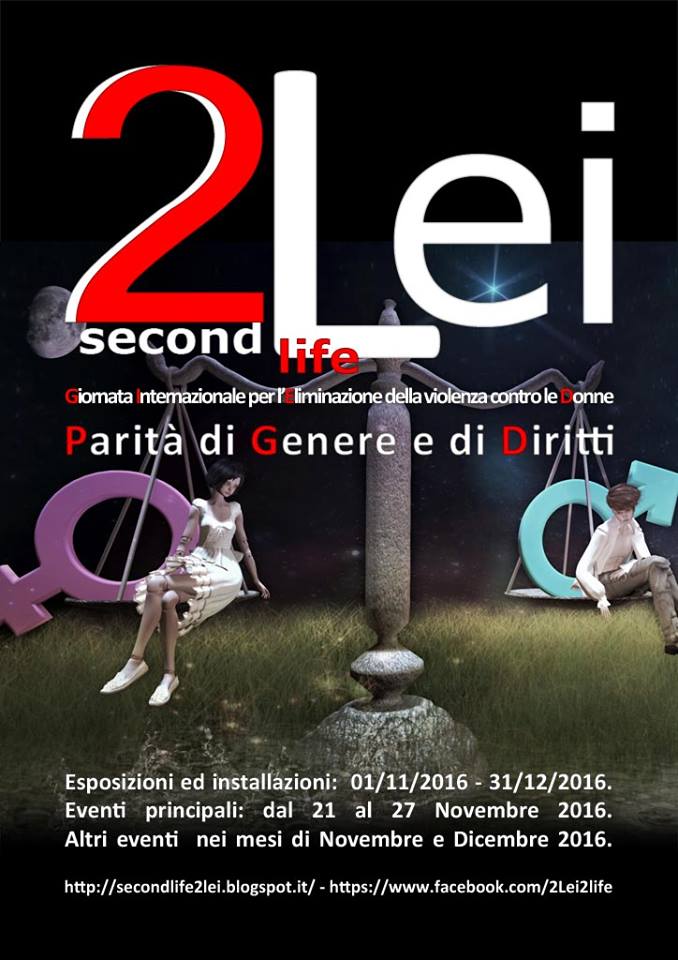 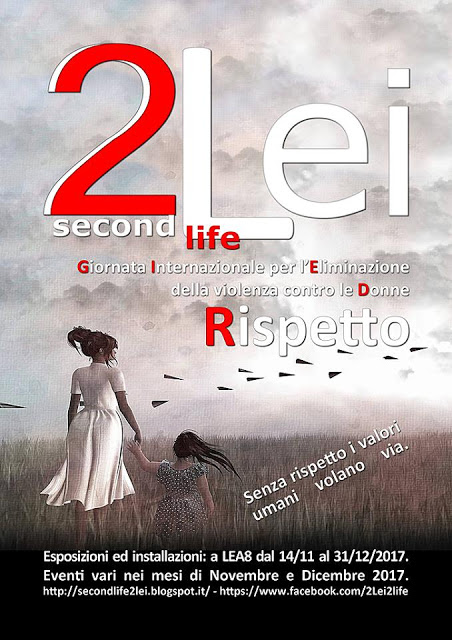 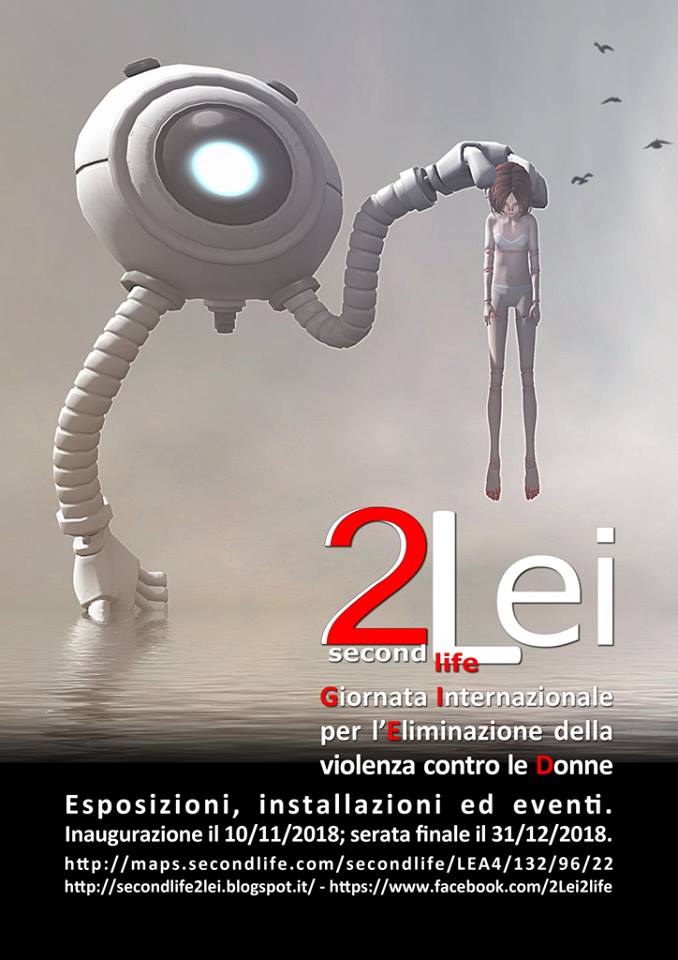 2Lei for the elimination of violence against women